After my usual breakfast. Two eggs scrambled, and two mojitos, – don’t judge me, I’m on a low carb diet, so no beer, and the hotel coffee is only average – I sat in the hotel lobby going through the photos I had taken. Some good, some bad, some terrible, and none of them straight. I’ve just got a new camera and its very, very, light. The weight of the camera, plus my general tremor, brought on by my advancing years, and possibly by my choice of breakfast beverage, has resulted in a certain amount of camera shake. I’ll fix the pictures on photoshop.

Guess what the weather was like? Give yourself ten points if you said raining. Everyday the rain. I grabbed, what has now become known amongst the staff as, Mr Kens Umbrella, and hit the streets. Past Massive Statue, right at Mayhem Corner, another right at Big Bank. I was headed for my favourite coffee stop. It was on the 4th floor overlooking a five way junction, where I could while away an hour or two watching the traffic.

Ah. The Traffic. I am now an expert. I glide, I sidestep, I finesse. I’m like a mature Billy Elliot. The only road I won’t tackle is Suicide Boulevard, a race track at rush hours. I have figured out the rush hours too. Morning rush hour runs from 7.30am until 3.00 pm. Things ease off a bit then… For 15 minutes, because evening rush hour starts at 3.15pm. It lasts until midnight.

I sat under a canopy and had a coupla Vietnameses coffees. They have a little sweetness. They taste like Tia Maria. After coffee I went in search of a shop selling belts. I soon found one, and with the help of the lovely assistant, I perused the stock on the rack in the doorway. We were doing the ‘special price’ dance, when, to get a better look. I pushed my (long) hair back. the girl stared at me, gave a little squeal, and started stroking my ear lobes. Honest to God. She flew into the shop and returned with two of her colleagues, who also wanted a touch. Blimey. What’s all that about. I looked it up later. Long earlobes are a sign of a long life and are therefore considered attractive. I completed my purchase and left. New belt under my belt as it were. 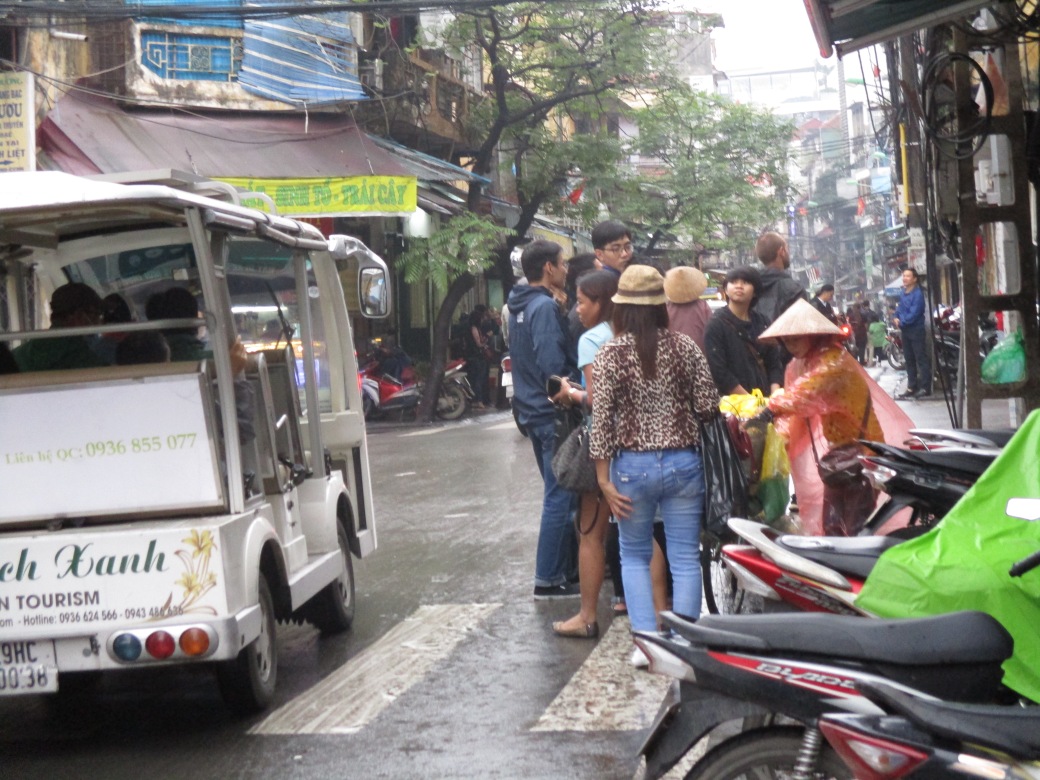 In the afternoon I walked over to the west lake. Nothing to report really it’s a lot like the central lake. Water and what have you. There were a lot of tour buses. The tourists were swarming around a pagoda. Dunno why. It was just a pointy tower to me. Still, one man’s pointy tower is another man’s engineering marvel. Had a bit of lunch and from the cafe watched some fisherman on the bank of the lake. Vietnamese fisherman are the same as fishermen the world over. And they have an etiquette. Rules. They fish in threes or fours but not together. They have to stand at least 6 metres apart. 8 metres is better. They must have flasks and folding chairs. At any given time at least one must be eating a sandwich. Oh, and they must be, or at least look to be, miserable. Yes. There’s a fine line between fishing and standing by the river looking like an idiot.

Back to Bia Noi Corner for the evening. Several of the streets that make up this entertainment area are pedestrianised at night. The restaurants and bars are also not supposed to encroach on the road but they do. There seems to be some unofficial look outs and when they give the signal it means the police are going to drive down/up the street. When this happens (up to 5 times a night) it’s all hands on deck. Diners and drinkers are all moved inside along with their dinners and the tables and stools they were using. The bar I was using, and considering dining at, was not quick enough to move their stuff, including the bar-be que-range and the cops grabbed the lot. Every bit of kit was arrested and tossed into the back of a truck. I think the owner has to go pay a fine the next day to retrieve his gear. In true communist style all the other restaurants give this guy bits of kit and he was back in business in a heartbeat.

So…to sum up Hanoi
The people are super friendly, hotel staff (I stayed at two hotels) can’t do enough for you. Any scams I came across, such as overcharging, glue boy and even the bold Mai were pretty lightweight and easy to deal with. The hawkers and touts leave you alone if you just say ‘No thank you’ and make eye contact. You will need to haggle though. Start off with a 70% discount, if you get it for 50% then you’ve probably done ok. Lots of things are cheap anyway, just decide what it’s worth to you.

Food. I never had a bad meal (or a bad stomach). £4 ( sometimes less) gets you a meal and a drink. Don’t be frightened of the street food and pop up restaurants with the tiny stools and tables. You’ll be missing out. I didn’t know all the dishes and often just pointed at someone else’s dinner. Many of the menus have pictures, anathema here in the UK but par for the course over there and helpful too. You can get really great coffee.

Traffic. Yes it looks a bit mad but you get used to it after a day or two. You will find yourself on the road a lot because the pavements are full of  parked bikes. Copy the locals. Make eye contact with the drivers and riders. Don’t speed up or slow down suddenly. It’s no good getting annoyed just laugh at the craziness. There’s not much peace and quiet in Hanoi, probably around the lake is as tranquil as it gets. After all it is a capital city with a population of 7.5 million and almost as many two wheelers. 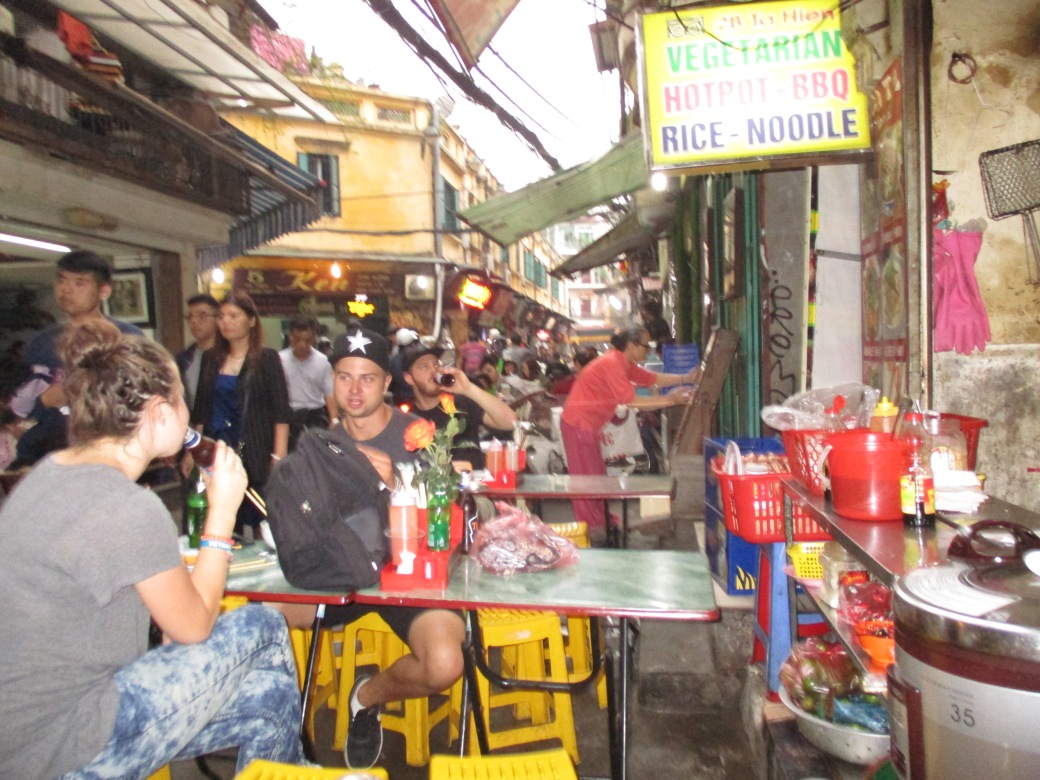 Bia Noi Corner (Beer Street) is a cool place to hang. I was down there every night. It’s all done by around midnight though so don’t go too late. In a nutshell I liked the city a lot. It’s unthreatening and a lot less challenging than many places I’ve been. So go. Enjoy.