My pre-booked motorcycle and rider arrived 30 minutes early. Ok, let’s go. I had a last fun fight with Saz, the bellboy. It’s how we do, y’know. I can see he’s impressed with my moves.
“Ah you have kung fu in UK”
“We do!” I replied “but in my part of the world we tend to favour the baseball bat.”
Sadly this is true. I asked the shop assistant in Sports Direct one time, if they sold many bats.
“A fair few” he said, ” It’s steady business”
“How about baseballs,” I asked
“No, none of those”.
So there you have it.

Mr Thang, my rider, strapped my bag onto the back of the Honda, strapped a crash hat on to me and with help from the two bell boys I was soon on the bike. I put on my sunglasses. Easy Rider. Before we hit the first corner he asked me if I was a member of Trip Advisor, and did I review stuff.

“Trip Advisor?.” I said “I’m all over it,” thereby guaranteeing myself a good trip. First stop was for water at a little roadside place. Mr Thang insisted on paying. I noticed he handed over 6000 for two big bottles, About a third of the ‘tourist rate’. We chatted.
“Would I like to see elephant swimming?” he asked.
“Sure, why not,”
We pulled off the main drag and rode for about 10 minutes down a bumpy, dirt road. I paid 2000 (10p) to enter and we parked. We had to walk 600 metres through the woods until we came to a small waterfall and a swimming ‘hole’. A few tourists were splashing around. I declined the swim and asked where the elephants were. He indicated a stone elephant carved in the rock. Ok, language problem, we both laughed. 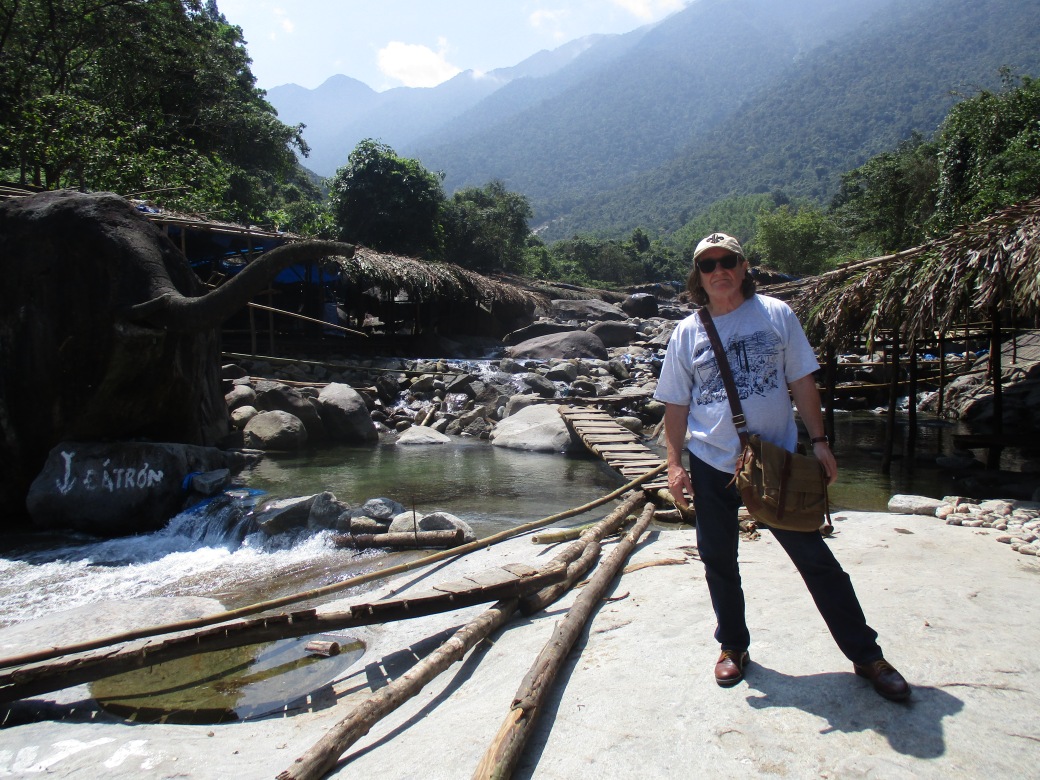 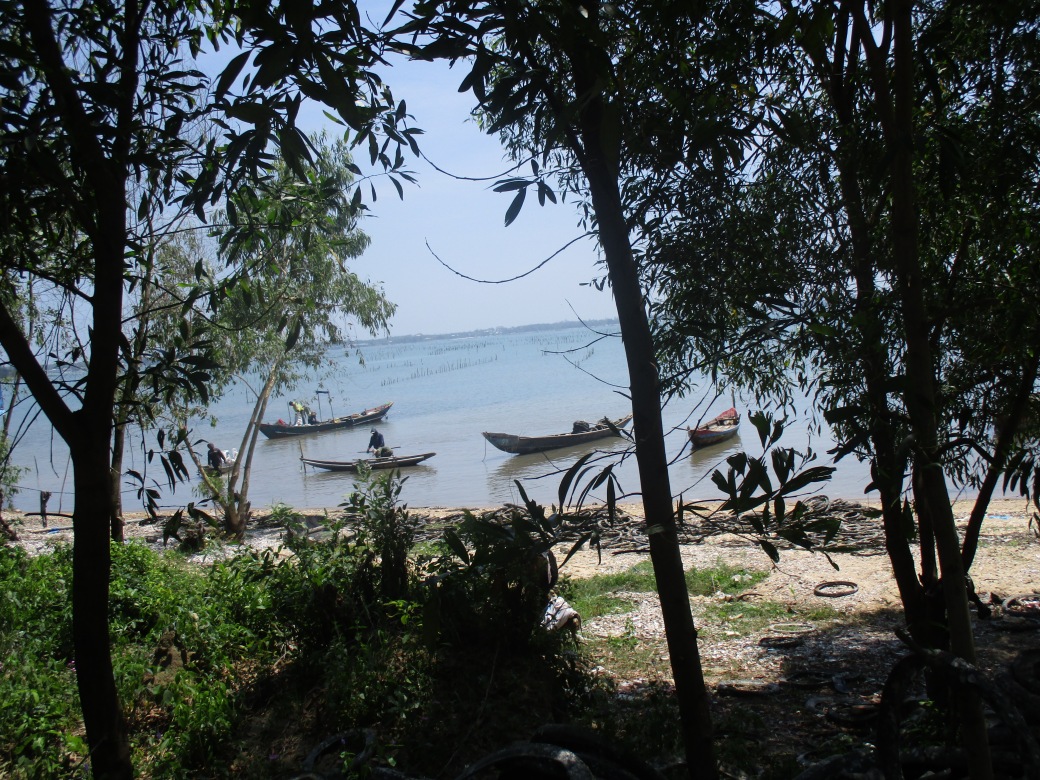 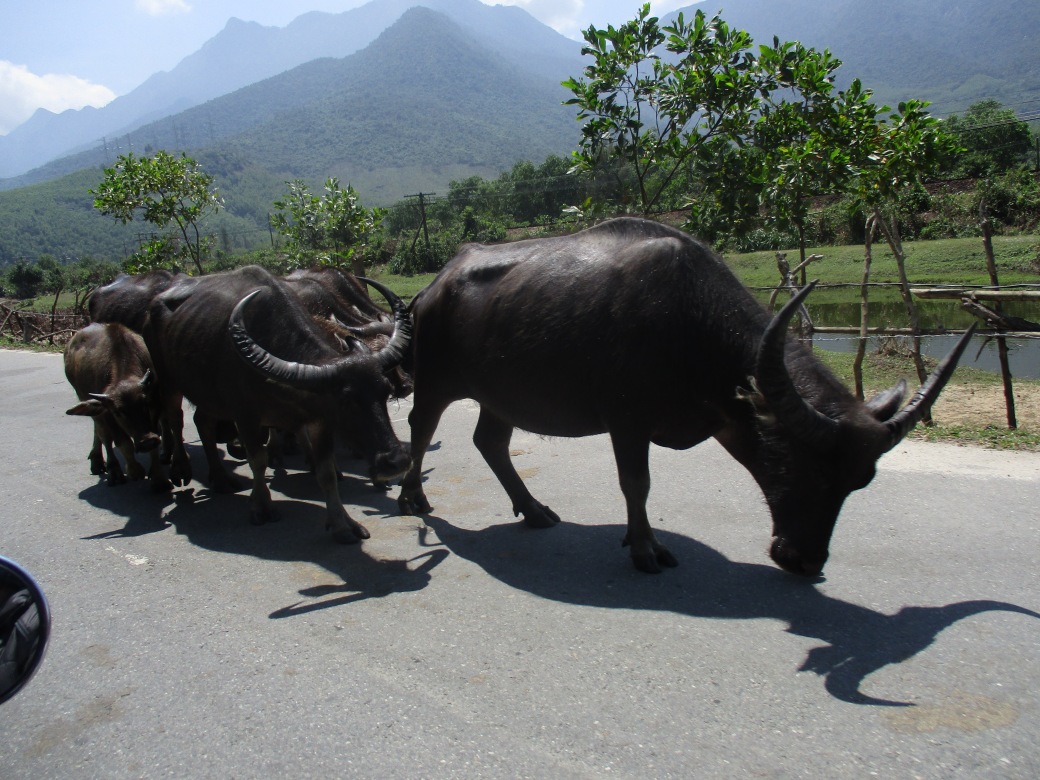 He admired my boots and asked if I was getting any made in Hoi An. Negative.
“Clothes?” he asked.
” Yes. Quite a lot. It’s my main reason for visiting Hoi An.” I replied.
“Which Tailor you go to?”
Ok, here it comes. Tailoring in Hoi An is a massive business. The biggest. It’s cutthroat and runs on commission. Everyone is on commission. Drivers, bartenders, hotel staff. Their commission goes on your bill. Hey, everyones got to make a living. They all try to finesse you, but with a little savvy, it’s pretty transparent.
“My tailor? Kimmy.” I lied
“Mine too!” said Mr Thang. “It’s very near your hotel. I can take you there.”
No problem to me. Remember, you’re not scammed until you hand over the money.
On the way back to the bike I asked Mr Thang
“Apart from yourself are there any other snakes in these woods?”
He missed it.
“Many snakes here” he said.

Back on the road, after a couple of photo ops, we stopped at the top of Hai Van Pass. Minibuses and coaches parked all over. All the tourists getting some great pictures. There are stalls and cafes. And touts. Tons of ’em. Very persistent. I tried to convince a stallholder who had fallen in love with me, that I had no use for a paper lamp or a quantity of polished pebbles.
“I can live without ’em.” I said.
She stroked my hair.”But I love you she said.”
“I know , baby, I know. I get that a lot. You’ll get over me. I promise. Soon as the next bus full of money comes up the hill.” 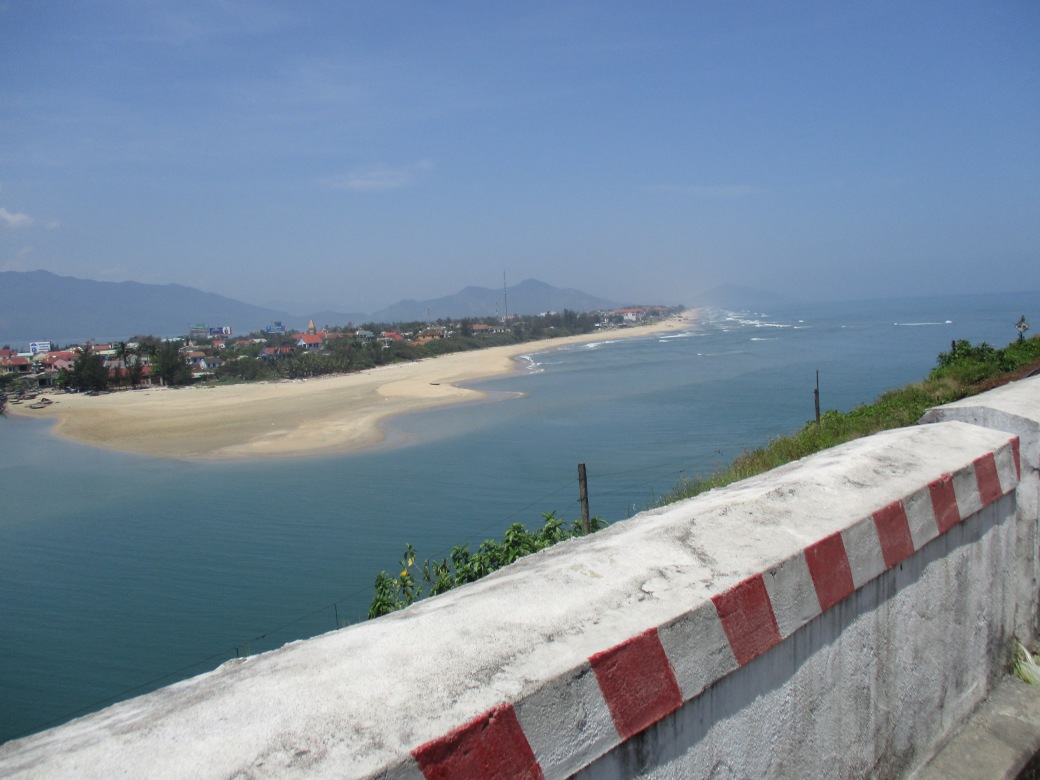 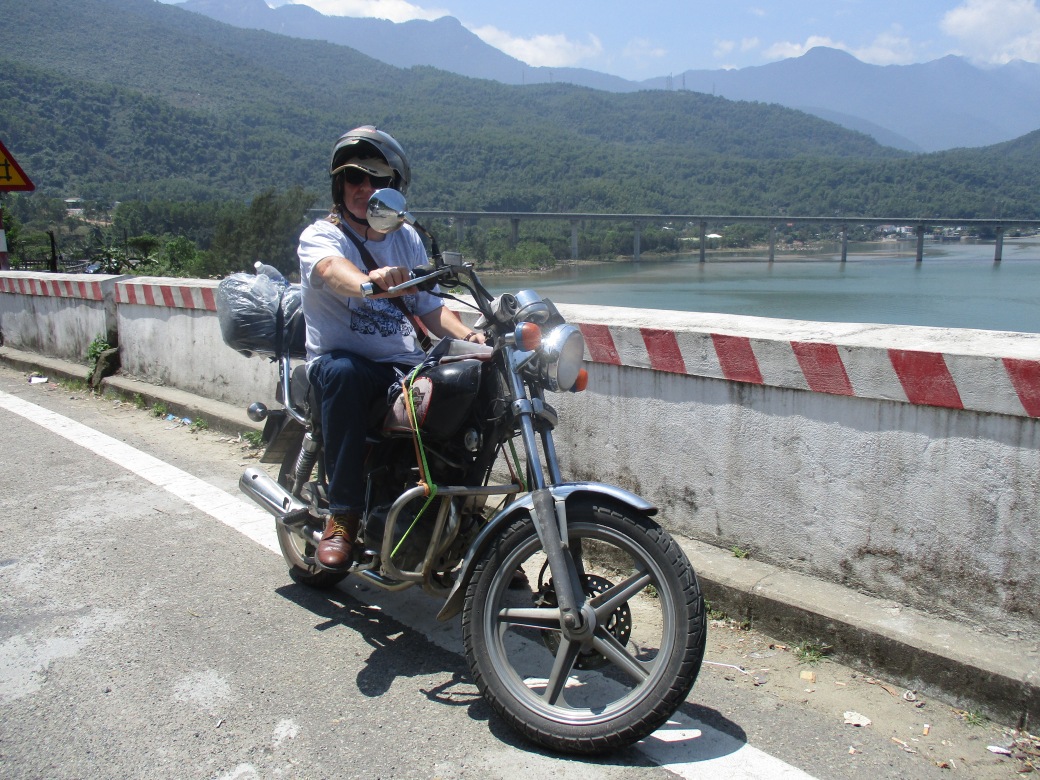 We had climbed about 500 metres and now it was time for the descent. We gathered speed. Mr Thang did a pretty good impression of Carl Fogarty. It was a thrill ride. Super cool. After a toilet stop in Da Nang, it was time for Marble Mountain.

So. I noticed two things about Marble Mountain.
1) It’s not a mountain
2) It’s not made from marble.
It’s a tiny hill with a cave in it. I bought a ticket for the cave. Don’t remember how much, but it wasn’t very much. I went inside. It was fierce hot outside and I was burning up. I slumped on a bench just inside the cave. I was sweating like Eamon Holmes in a salad bar. The lady next to me waved her fan in my direction. Oh shit. Here comes another bill. And I didn’t even know the rate for wafted air. Do you pay by time, by cc of air wafted, by velocity of said air? I had no clue. Anyway after she cooled me down she just smiled, and walked away. Man, these people are so nice.

So. Inside the cave. Up the steps, down the steps, dead ends, squeezes, high uneven steps. Very narrow in places. Claustrophobic too. I’m pretty fit and agile for my age, but there were out of shape, old people in there really struggling. And no staff. And no sineage. It was like a maze. I have never been so disoriented since I was in Ikea on a bank holiday Monday. (Other furniture stores are available). Check out google images, you’ll be shocked at the steps and the distances. I didn’t figure it was especially busy that day too. Must be a nightmare when it’s crowded. I eventually stumbled out and found the bike. 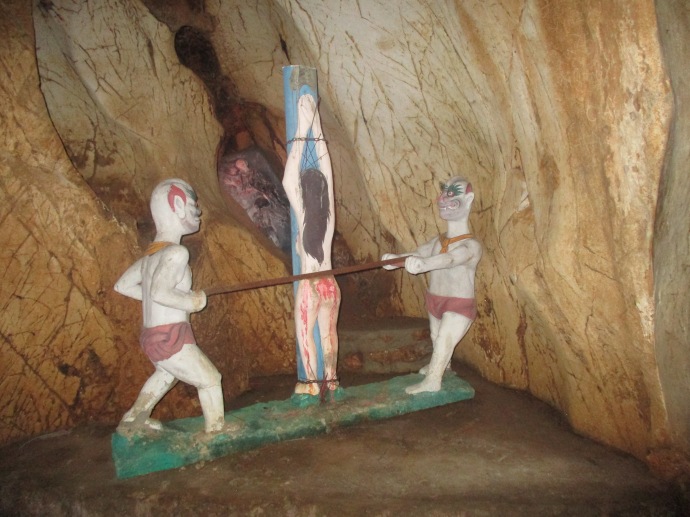 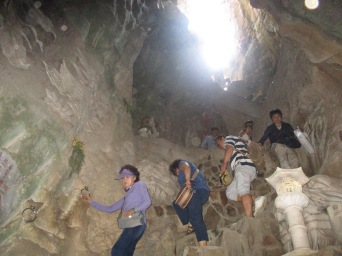 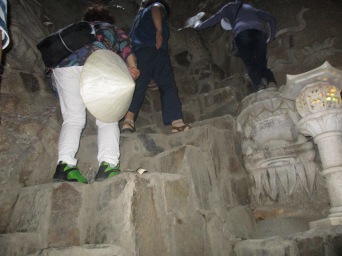 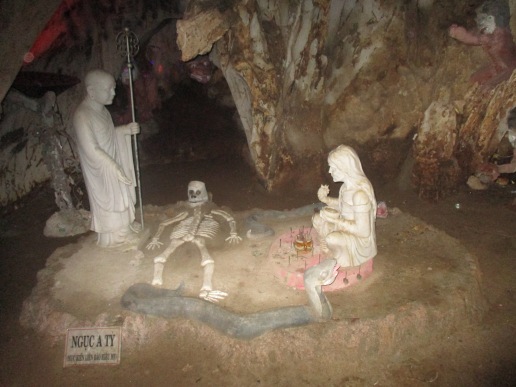 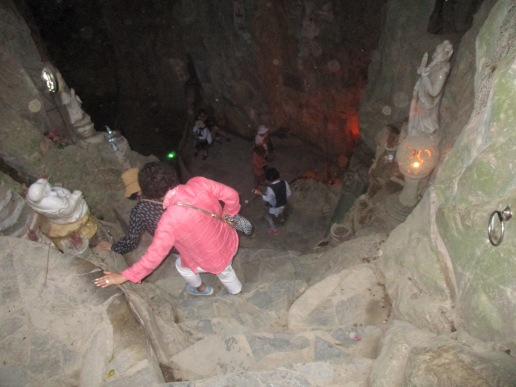 Thirty minutes later we arrived at Kimmys the Tailor. one minute from my hotel. Mr Thang dived in and returned with an assistant and more water. I got the sales pitch.
“I’ll come later,” I said “I need a shower”
They did their commission deal in their language and Mr Thang carried my bag to the hotel.
I liked Mr Thang, an informative guide and a safe rider. He doesn’t get marked down by me for the tailoring thing. That’s just how they roll here. He got a big tip and he’ll be getting a good review. Due to the power of Trip advisor good reviews are vital to anyone in the tourism business.