‘Ryanair have cheap flights East Midlands to Naples,’ said The Little Nurse ‘Wanna go?
‘Yes,’ I said. ‘Someone should keep an eye on the Italians. Might as well be us.’

Ryanair let us down this time. I don’t normally knock Ryanair but they harried us to board quickly, two hours late, only to tell us we probably wouldn’t be leaving for another two hours. We arrived in Naples at 2.00am, over 4 hours late, too late to eat, but we were able to get a drink in the hotel reception. Gin is a kind of food, right?

The hotel was a bit weird. It bills itself as an ‘Art Hotel’ whatever that is. Maybe it’s because your wardrobe is a collection of brightly coloured shelves and a hanging rail, without doors. Or sides. Or a top. Or maybe it’s because the corridor lights are in the floor so you have to dance around them in order not to burn your feet. Or could it be the lamp made from a juice carton? The room had french windows, opening on to a tiny balcony, overlooking a fabulous street. No sea view, no rolling parkland or ornate gardens. Just a proper street with people, traffic, arguments, and dogshit. I loved it.

As she sat on the bed reading a guide book, The Little Nurse told me we needed to avoid the Quartieri Spagnoli (Spanish Quarter) the most dangerous area, and asked if I knew where it was on the map.
‘Don’t need no map.’ I said, ‘Look out of the window. This hotel is bang in the middle of the Spanish Quarter. Don’t worry about it. I already did a risk assessment.’
‘Result?’ she asked.
‘Came back risky,’ I had to admit.

Naples is perceived to be dangerous. We didn’t find it so. It’s dirty, grafittied, and there is rubbish everywhere, but it’s real. Because of it’s rep, it gets a lot fewer tourists than Rome or Venice so that’s a good thing. The neapolitans live life on the streets and we loved just walking around soaking up the atmos. And walk around we did. On our first full day we must have walked around eight miles or more. We started off in the atmospheric streets of the Quartieri Spagnoli. The blocks of apartments here are four or five stories high. Inhabitants of the upper floors use buckets on ropes to transport stuff to their apartments. Clothes dry on washing lines attached to all the balconies.

After a lunch of pizza and wine we wandered into the Centro Storico area and found ourselves outside the Museo Capello Sansevo. So we paid our 7 euros and went in to see the veiled Christ statue. It’s a remarkable sculpture and well worth seeing. Photos are not allowed but I took in my tiny GoPro camera to see if I could grab a pic or two. The camera (named Chesty as I usually have it on a chest harness) is really small but it was spotted almost immediately and I was told to put it away by one of the attendants, a big ugly woman you couldn’t really argue with. She looked like she could scare toothpaste back into the tube. I put chesty in my pocket and the big witch decided there was little point in executing us and went in search of other picture thieves. The pix of the statue posted here are not mine. I found them on the internet but I don’t know who to credit. 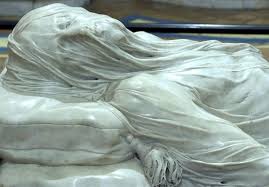 After a rest, a shower, and a change of clothes we headed out for drinks and dinner. Via Bellini is a cool street of bars. The bars are good but some of the restaurants are a bit touristy and we ended up in one of those. We had a really bolshie waiter. First he was cheesed off that we didn’t want water. Then he was trying to select our food from the menu. He didn’t bring us bread but still put a cover charge on the bill. Disdainful that we didn’t want dessert. And then, when he brought the bill, he made it very clear that service was not included. I always tip, but this guy was way too much. I put the exact money in the bill holder. He counted it at the table, glared at me, and stood over me for way too long. It was almost extortion. I didn’t blink. Fuck him.

We called at one more place on the way back. It was a book shop with a bar in it. I ordered two large gins and asked if they had any books on alcohol abuse.

14 thoughts on “Naples 1: Keeping an Eye on the Italians.”