The Camino de Santiago has a few different routes. El Camino Frances (the French Way) is considered the classic route. It starts in St Jean Pied De Port on the French side of the Pyrenees. It takes 30 to 32 walking days and covers 780km to Santiago de Compostella. I had decided, due to time constraints to start at Burgos, a few days in, leaving me with 500km to cover over about 22 days.

I had obtained a Credencial on an earlier trip to Santiago. 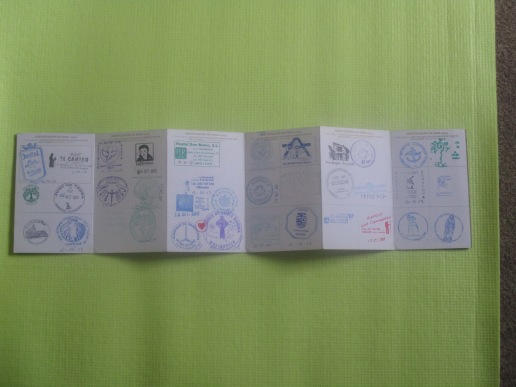 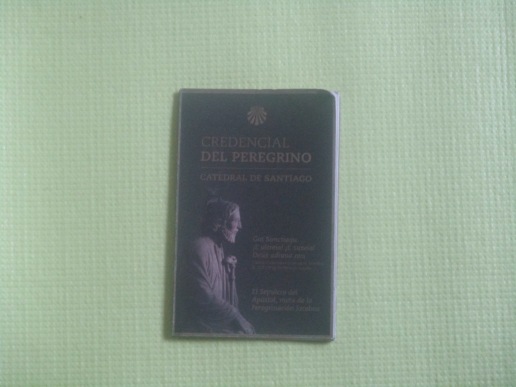 This is like a passport for the Camino and proves to the Albergue staff that you are a bona fide pilgrim. Hmm. I can see that this is going to need a mini glossary and a bit of background for those of you new to The Camino.
OK so, the Camino de Santiago is a pilgrimage undertaken by a wide variety of people from all over the world and for many different reasons. There are several routes. The French Way, The Portuguese Way, The English way, The Primitivo. The Silver Route etc. etc. The walkers are known as peregrinos and peregrinas. There were about 300,000 walkers in 2017. A scallop shell attached to a backpack identifies a pilgrim. Other icons of the Camino are the Christian cross (red on a white background), the staff, and the gourd. The routes are well signposted with yellow arrows and sculpted and stylised shells.
Walkers stay in Albergues, in bunkrooms, for a small fee. Sometimes the fee is in the form of an optional donation. These Albergues are known as Donativos. All albergues are run by Hospitaleros usually volunteers. They often have communal kitchens and laundries and some provide an evening meal and/or breakfast. They close early in the morning, usually before 10.00 so you should be on your way early. You can check in usually around 2.00 but sometimes later. Doors are locked and lights go out early too, 9.00pm or 10. The Credential proves you are a pilgrim and allows you to stay for one night. It gets stamped along the way.
When you present your stamped Credencial at the Pilgrims Reception Office in Santiago it receives a final stamp, and you are issued with a Compostella which is a sort of certificate to commemorate the achievement.
Ok. Got all that? Good
As I left my hotel at dawn the rain started. Within the first minute. Rain. I managed about 50 metres and decided to stop for coffee. An inauspicious start. But the rain stopped and I was finally on my way. I crossed the small bridge and turned left. At this point I have seen no other pilgrims but it is just getting light. A mile or so later I came across some fellow travellers. They were heading into town, the opposite direction to me. I was going the wrong way. I nodded and by continuing on my path I pretended I was just on my way to work or something. When they were well ahead I turned around and followed them. From a distance. Out of sight. Like a private eye.
This is not my worst start to a walk. Once, in the lake district, armed with a map and a description of the walk, I found myself lost in the carpark at the start of the walk, looking for a gap in the hedge I have never found to this day.
I walked to Hornillos about 20k and I had planned to call it a day there, but I was that pleased to be on the Camino, and, as I felt really fit, I decided to walk another 10km to Hotanas. I was flagging though when I got there. The first alberque at the top of the hill looked really nice, so I rolled in. I had used a hotel in Burgos so this was my first experience of an albergue. Well impressed. They would not always be as well appointed as this one though. I took the dinner for another 8 Euros available to the first 12 takers. It was very convivial. There was a massive pan of paella, I didn’t think 12 people could have finished it, but the younger members of the party polished it off. At my end of the table only one other person was drinking the wine provided. Good job I was there. This was where my training kicked in. it went down very well. They were lucky to have me.
The conversation turned to our gear. Bill, an american from Texas was carrying a huge pack. His own gear, and most of his wife’s. He had, he said, almost 30kg. Crazy. I told him I had lightened mine by deleting 20 books from my kindle.
‘Books are heavy.’ I said. I’m not sure he believed me.