You Can’t Take That.

I finally decided to walk the Camino de Santiago this year. It’s been on my radar for several years now and I’m getting older. There were two things to sort out after the usual travel arrangements.

The training would consist of three elements.

2) Brushing up my not-so-bad Spanish.

3) Drinking a lot of red wine and a bit less white.

I would get my equipment appraised by my sister and brother in law. They spend their lives outdoors. They trek through the Alps for months on end. They fight bears just for fun. They can suck venom from people’s snake bites. Even Ray Mears rings them up for advice.

I, on the other hand, am more at home in the cocktail bars, restaurants, and nightclubs of trendy Harrogate and have never even seen an Alp. So I went to see them…

Apart from my boots and one top everything else in my carefully selected and colour coordinated equipment was pronounced “shit” and totally unsuitable. I was given a list of gear to obtain, which brands to avoid, and told where to purchase all this crazy expensive stuff. Everything recommended was off trend. I would need imagination in the accessories department to pull off any kind of a look. Cotton was banned and even my funky tote bag was consigned to the rejected pile. With an eye on weight, my sister advised carrying only one change of clothing in the backpack. Two outfits in all.. This is for a man who has been known to change clothes if the sky darkens to avoid a colour clash. Two outfits! Two! That’s just one more than batman. I bit the bullet and followed the advice. Largely… I snuck in an extra hat and three different coloured bandanas

Due to time constraints I had to compromise on the training programme. The wine element went particularly well. The Spanish language skills were brushed up. But there was no time to do any actual walking. Why would I need to practice walking anyway? I already knew how to walk. I had been doing it since I was 10 months old. I resolved to get in a little practice at the airport.

I flew to Barcelona. As I was travelling to Burgos by train the following day I had booked a room near the Station. It turned out to be the world’s smallest hotel room. When I put the key in the door I broke the window! 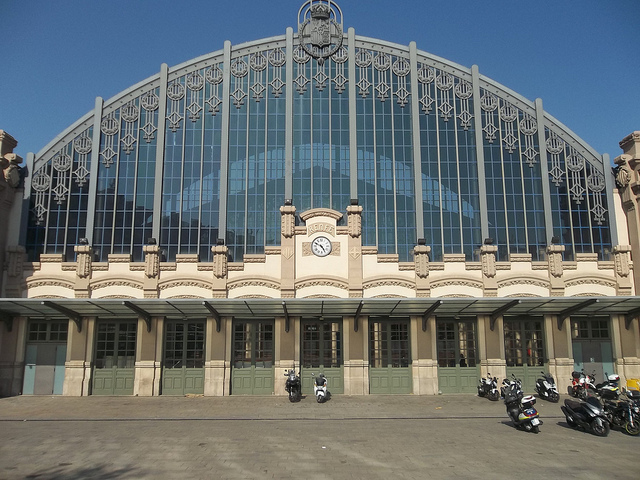 Walking from the station to the hotel there was a cacophony of discordant banging. It was deafening. I couldn’t see where it was coming from at first. Then, looking up, I saw a resident on his balcony banging a cooking pot with a wooden spoon. And several more on the next block. Then dozens of local residents, all on their balconies doing the same thing. All with cooking pots. Banging away. Turned out it was the eve of the Catalan independence referendum and this was like a call to arms. Or at least a call to the polling station. The central government in Madrid just need to promise every Catalan a proper drum. That’ll nip the whole thing in the bud. They were knocking the hell out of their cooking pots and pans but you could sense a little disappointment that they didn’t have real drums.

As I was in need of food and beer I went exploring and was intrigued to see a waiter on a segway. The restaurant (and kitchen) was in the basement but the terrace was on the ground floor. The waiter was delivering food, and full trays of drinks, on the segway. He drove that thing up a ramp. Both hands balancing trays of food and drinks, and didn’t dismount at the table. Great to watch, like cirque du soliel. I had to go in. The place was called Birras & Tapas. The food was pretty good and the huge selection of imported beer was ice cold.  Cheap  too.  I returned to the hotel without getting lost. Bonus.