Monday morning. The Little Nurse went to the lobby for coffee. She came back empty handed defeated by the coffee machine. These things are our life long adversaries. We have had trouble with these ridiculous machines all over the world. We have ruined lobby carpets, taken the polish off tables and scalded other guests. In Lisbon, every morning for a week, a six year old got coffee for us. I was tempted to kidnap him he was so useful. I asked her to describe the machine. It was one of those a little pellet of coffee needs to be inserted into. Somewhere. No one knows where. Except George Clooney. I asked her if Clooney was hanging around the lobby but she didn’t think so. I thought that was a bit of a long shot before I asked but I needed coffee. She pushed off to the bar next door and soon returned with the good stuff. One cup was enough to get me in and out of the lift, through the front door and into the bar next door for the second hit.

We wandered down to the tourist district and had a little mooch around. We’ve been to Seville a few times so we had no need to visit any of the main sights. We were killing time until it was time to go to the show ground which we did around 2pm.

There’s plenty of info around about the Feria and I’m not attempting to write a guidebook here so I’ll just give you a few facts. The Feria started off as an agricultural trading event but now is completely social. It’s a celebration of all things Andalucian. Horses, gastronomy, sherry, flamenco dancing , and music. People gather in huge tents (casetas) mostly private and drink and dance all day and night. Horse owners and carriage owners parade around most of the day. Everyone dresses up. Women in flamenco dresses and the men in suits. It’s a family event too with a huge funfair adjacent. Invitations to the private casetas are coveted but there are a fair few public ones so you needn’t feel left out. If you want to know more look it up, I’m not your teacher. 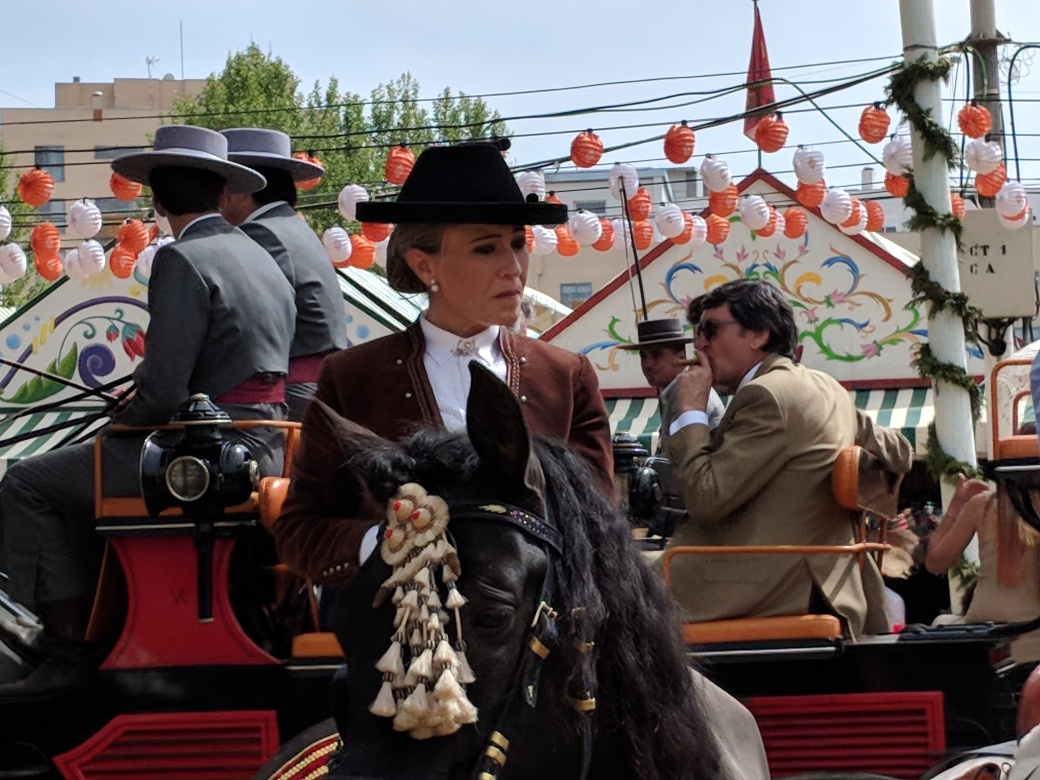 We spent the day just mooching around admiring the horses, carriages and costumes, and taking pictures. I’ve just got a GoPro so I affixed it to a chest harness and set it to take a picture every half second. By the time I turned it off I had taken over 10,000 pix. It’s a brilliant bit of kit but later you have to view every picture and just keep the ones you want. A long job. Still going through them 3 weeks later.

There are a few public casetas so we hit one for refreshments. The prices were crazy cheap. At an event like this too. I got two beers and two pork sandwiches for €6. Waiting for my change I saw the price list. It stated

“These prices will be reduced by 50% for persons over 65”

He came back with my change and I informed him of my venerability, backing it up with my bus pass. He examined the pass, told me I looked about ‘cuarenta’ (40), went back to the till and returned with another €3. Half price drinks with a compliment thrown in! Gotta love Spain. We got twice as drunk for the same money. 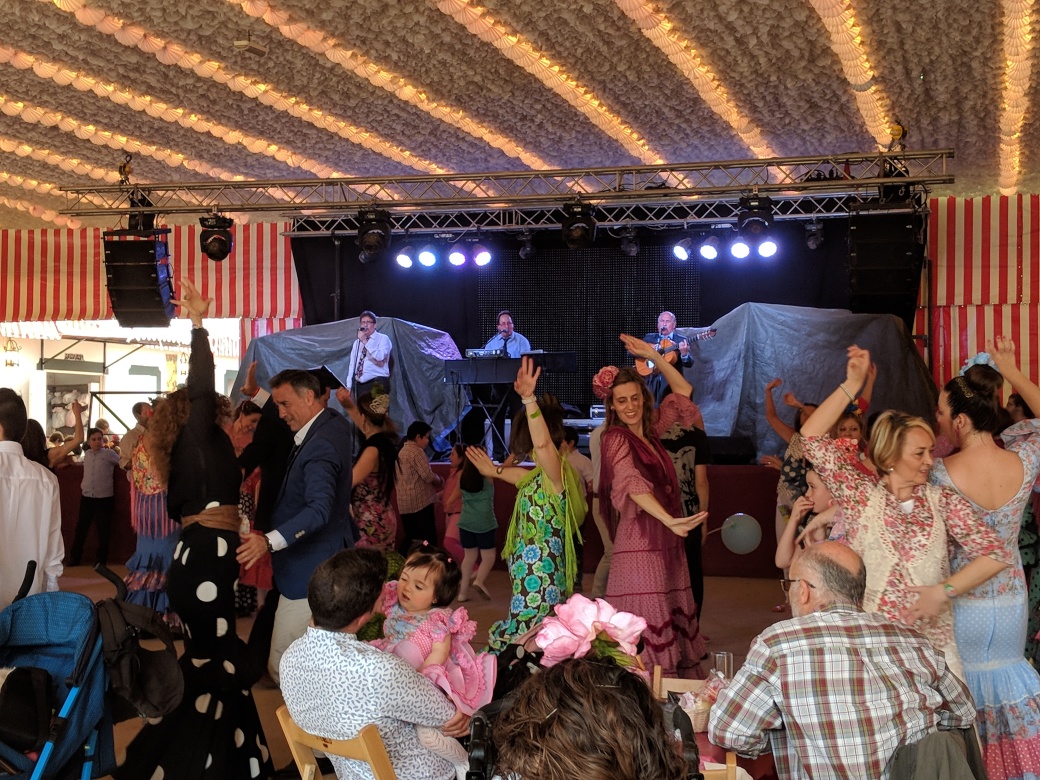 Rebujito is the sevillianos drink of choice at the feria. It’s about 5 parts Manzanilla (a type of fortified wine like sherry) and 1 part sprite, served with fresh lime over big ice cubes. This stuff – with my ancient persons discount – is €3 a litre. A litre!. We polished off about four litres over the day so thought it prudent to go to the hotel for a delayed siesta.

We saw Mr. Bean on the way out

And I almost got arrested for being too smartly dressed