After a night in Malaga we caught the 10.30 train to Seville. It got in an hour late. We had about a half hour walk to the hotel. We swapped wheelie cases because the Little Nurse was struggling with hers. Too heavy she said. In reality one of the wheels was jammed. It might as well have been an anchor. Dragging it for half an hour killed the case  completely so a new one would be obtained later.

We checked in. The hotel was ok, nothing special, although, because of the Feria, it was about twice what we would normally pay in Seville, and we had had to book it months ago. There was a rooftop terrace and bar, one of the attractions and probably the best feature of the hotel. Guess what. Closed (except for breakfast) for the duration of the Feria. I asked why at the front desk.

‘Because of the Feria’ was the only explanation.

‘Yes, but why’ I repeated

‘Because of the Feria’ the receptionist shrugged and looked at me as though I was mentally deficient in some way. I told them that the roof terrace was my main reason for selecting their hotel. Another shrug and another patronising look. I asked for a discount on the room. No. I asked if the hotel was full. It was.

‘Hmm do you not think that your only amenity should be open when you are so busy?’

I gave up but I did ask if they thought Irish Bars should open on St. Patrick’s day, a subject they seemed to have no strong opinions about. 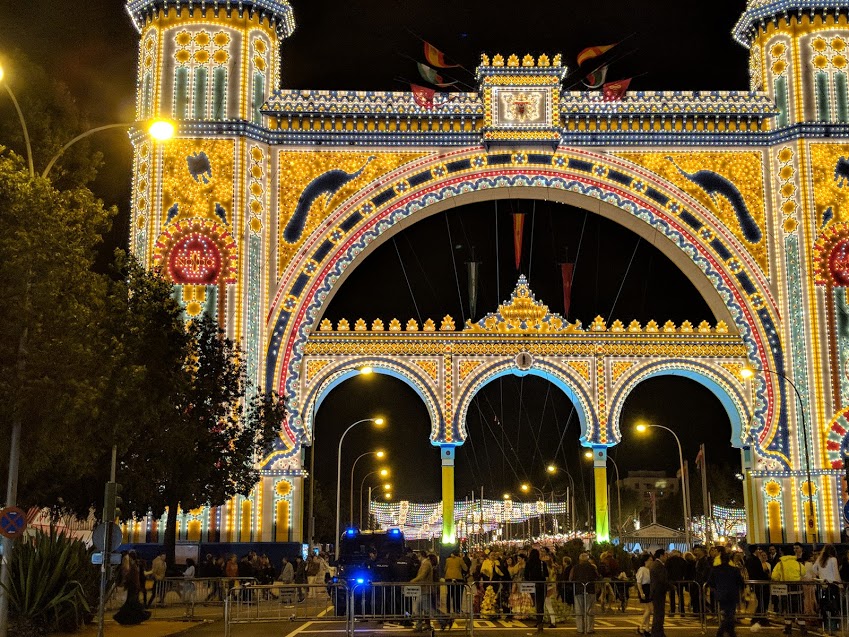 Tonight (Sunday) was the big light switch on up at the Feria Ground (The Recinto) but we had no plans to go to that. These light switching events are a bit overhyped to me. Look at provincial British towns where, before Christmas, they wheel out a half dead celebrity to hit the switch. I could go the rest of my life without seeing one of those I’m sure. And I probably will. We stayed local. Which is to say around the Alameda de Hercules. This massive, largely pedestrianised area on the edge of La Macerana district is in my opinion the best place to stay, eat and drink, in Seville. Fifteen years ago it was a little bit seedy if not exactly dangerous. Cleaned up a lot these days it still retains an authentic edge. Locals, including alternative types far outnumber tourists. If, like us, you are tourists, then you can use the bus, or walk in about 30 minutes, to the more sanitised Santa Cruz area where most of the main sights are. Taxis are cheap too.

We had dinner at Al Ajibe, a local place. Nice inside without being pretentious. This place is popular for people in the know so we had to wait a little while to be seated. The food here is worth waiting for believe me, and while you’re waiting you can be drinking. No complaints or impatience from us then. We had a few tapas all first class but the duck breast deserves special mention. Delicioso. 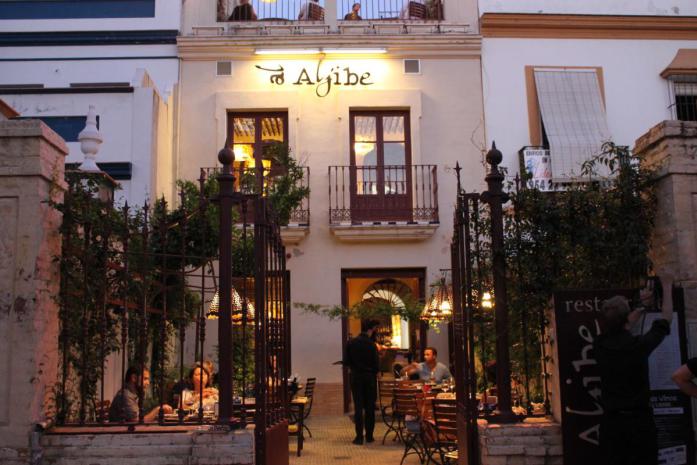 After coffees and Grand Marniers we strolled around the Alameda. There’s probably about 30 bars around this huge square and we wandered into one.

There was a lifesize Marilyn Monroe mannequin in the corner and pictures of drag queens on the wall. The back bar was festooned with fairy lights, fake fur and tinsel. Abba played through the high quality sound system. The bartender was wearing a see through sleeveless tee shirt, daisy dukes and Doc Martens boots. We got some beers. I asked the bartender if there were any gay friendly bars nearby.

You don’t say! We took a seat and after another drink said goodbye to the barkeep. We got a few ‘bye byes’ and a chorus of  ‘buenas noches’ from the other ten or so customers, all male. Friendly folks. Back in the street the Little Nurse asked me how come I was so interested suddenly in gay friendly bars.

‘I was just having fun with the bar guy’ I said

‘With the gay bartender,’ I said ‘In that flamingly gay bar. With all the gay customers’.