I left Nathan to his breakfast. Although mine was in the price of the accom it was too early and the buffet did not excite me, so I gave it a swerve. I set away before sunrise. In the twilight. Funny word twilight. Good name for a car. The Toyota Twilight. This is what the Camino does to you when you walk alone. Makes you think. Well it does to me anyway. I don’t ponder the meaning of life or search for the ‘truth’. Nothing too profound. I’m much more likely to wonder who was the guy who first ate a banana and what made him do it. I’m as shallow as a kids paddling pool.

For example, a few stages back, walking alone, I was struck by how many foodstuffs sounded like holiday destinations. Blancmange could be a seaside town in France. Taramasalata, a Greek Island. Fancy a week in Cinnamon Bun or Quinoa. Very exotic those two. How about a two centre holiday in Sausage and Beans. Ok maybe not the last one, but you catch my drift.

Not long out of Foncebadon, rounding a corner on the narrow path I came across a group of peregrinos and peregrinas sitting around. The Kid Reed was singing and playing his uke. Canadian Bob was there, Jeff the cockney bus driver, and sundry others. We chatted. They had stopped in this particular place to watch the sunrise and invited me to join them. Negatory. I pushed on. I wasn’t being anti-social (although it was early). No, it’s just I don’t really get the sunrise/sunset thing. To me it’s about as exciting as a salad. I’m in a good position to judge here, having been around for more than 25,000 of ’em. Sunrises that is, not salads. Obviously I haven’t seen all 25,000, I slept in for a few, and once I was locked in a pub toilet which wasn’t my fault. What happened was… Well maybe it was a little bit my fault. Nevermind that now. No, sorry, sunrises leave me cold. And have you noticed how many places around the world claim to have the best one? What? It’s the same one, suckers, just a bit later on in the day. These places hype up the sunrise/sunset thing because they have fuck all else to offer. That’s all there is to do there. Yes Siesta Key Florida, I’m looking at you. And Agonda Beach Goa, you too. Sunrises, nah. I’d rather watch a fat bloke fall off a bike. Now that can be spectacular.

See below. All the same. Told ya 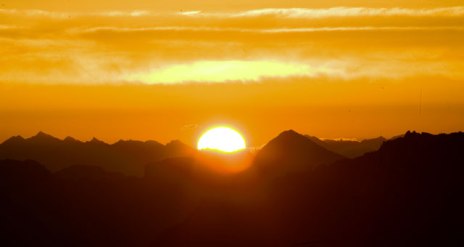 As I pushed off, the sun rose just over my left shoulder. I knew it would. I didn’t look. I was now at the Cruz de Ferro (the Iron Cross). This is the highest point on the Camino Frances but by no means the toughest climb. That accolade, by consensus  goes to the climb over the alps at the start. As I had started in Burgos and missed that particular climb my vote goes to the section leading to O Cebreiro which I was due to tackle 3 days after this one. Other people have their own views.

The Cruz de Ferro is an emotional place for many. Pilgrims bring a small stone from home representing a burden which they leave at the foot of the cross. I didn’t linger too long. If you’ve been following this journal you have probably gatherered by now that it’s not really my bag. Enough said.

About 3 klicks on I came upon a tiny village. Manjarin, population one. I stopped for a coffee. It was a really cool place. There is an albergue here, the only functioning building. it’s run by a guy called Tomas and his helper, about 6 beds I think, no electricity and no running water. People who stay here mostly wax lyrical about it. The real deal they say. I’m already roughing it, what with the patchy wi-fi and no room service, so that would have been a step too far.

I lost the path a time or two after this. I ended up on the road more than once. Pilgrims were scarce. I put it down to my early start and others lingering at the cross. The path, when I was on it, was stony, and steep in parts. It was separated from the road by a few feet of scrub. Bushes and general wilderness were on my right. Suddenly 15 metres in front of me was a dog. A big dog. Big as a pony. I stopped dead and he sized me up. I stood for a full minute. His eyes never left me. Where the hell were any other travellers. Ok, I’m going to go back up the trail. I turned around. Shit. Barely ten metres away there was another dog. Same size, same colour. Now what. Just at that, around a  bend, behind the second dog, came a young Korean guy. He was walking with poles and going pretty fast. Almost running. He just went around the second dog.

‘They’re lovely dogs,’ he said not slowing down.

I fell in alongside him. As we passed the other dog,  both dogs started to follow us. The ground underfoot was loose, almost scree and the young Korean with his poles was going far too quickly for me. I slowed, hung back, then pushed through the scrub onto the road. Within a minute both dogs reappeared behind me! I was scared.  I was. These boys were massive and I don’t like big dogs. Or any dogs. Hell, I’m even scared of wasps. The dogs kept pace with me. Each dog was 50kg. Large, economy size dogs. If they decided I was dinner I would have no chance. I saw a roadsign for an alberque. 8oo metres it said. I sped up. So did the dogs. I didn’t dare look round. I could see the shadows of the dogs alongside my own shadow. I could hear them breathing and slobbering. I was walking as fast as I could now without actually running. And I was tiring.  Fast. 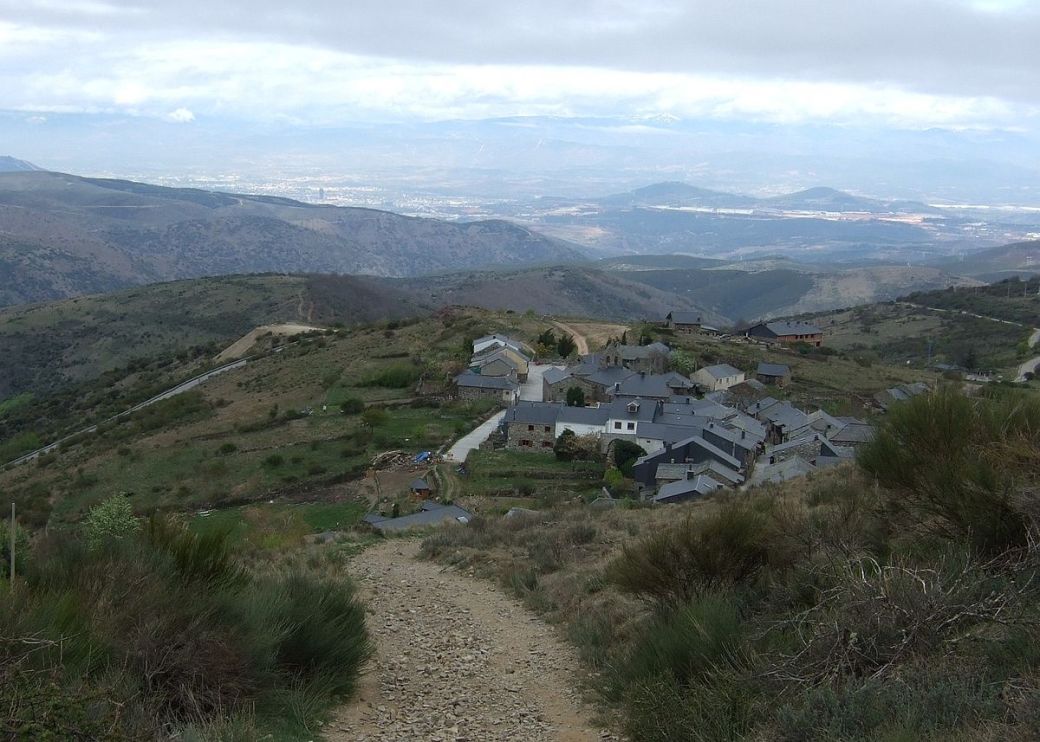 At a bend where the road rejoined the track I saw the village in the distance. And I mean in the distance. It was at least 2km away. My heart sank and I slowed knowing I couldn’t keep up the pace. I cursed myself for not having a couple of raw steaks laced with tranquilizer in my pack. I should have been more prepared. I cursed Ryanair for their ban on handguns, and I cursed all fast moving Koreans for their inhumanity to fellow travellers. I stopped and resigned myself to my fate. The dogs didn’t stop. They passed me without a sideways glance, although I did think I heard some sniggering.

I slumped ecstatic on a nearby rock. Within minutes wave after wave of pilgims swept past me like a football crowd. This previously deserted spot was now like Piccadilly Circus. I laughed with relief. Bob was amongst them and stopped when he saw me. I told him the tale. He laughed.

‘Told ya to get some poles’ he said.

‘Poles!? Poles!?’, I repeated. ‘You didn’t see those monsters. They would just eat poles. I wouldn’t face those guys without a Glock 9mm and a spare magazine.’

My anxiety was still in receding mode and I was disappointed that Bob thought the whole thing was funny. I made up a story on the spot about being attacked as a baby, in my pram, by a pack of wolves, and finally illicited some sympathy. 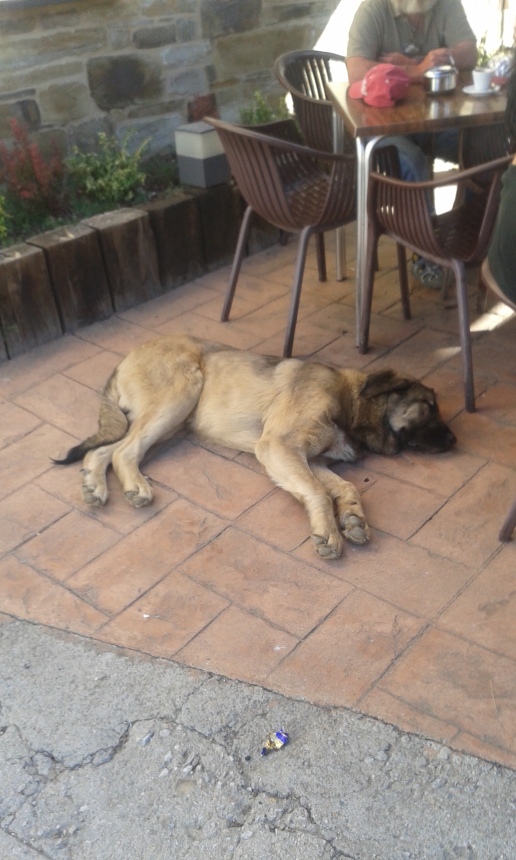 look at the length 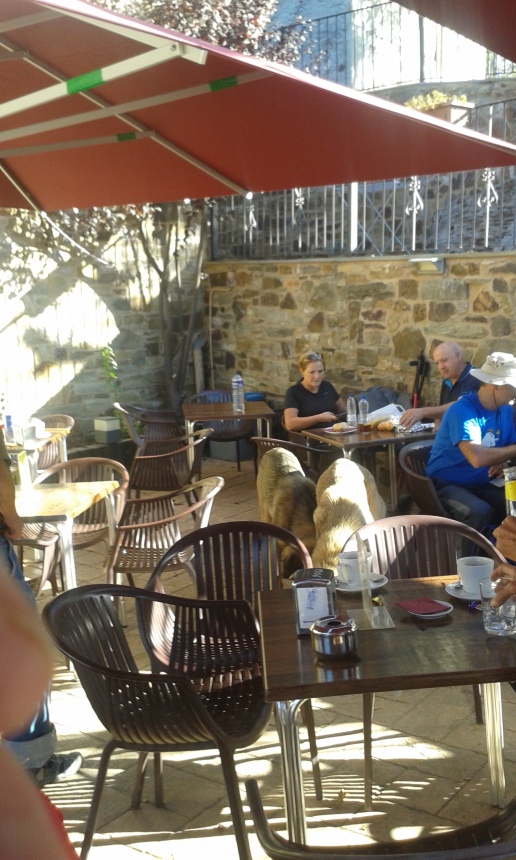 look at the height

We got to the albergue at El Acerbo a very nice village. On the terrace, as large as life, were the two dogs. Lying around catching a few rays.

Bob stroked a dog. He asked me my plans.

3 thoughts on “Camino 9: Sunrise and The Devil Dogs of El Acerbo”