As we had arrived fairly late into Santander our first morning was spent getting our bearings. I photographed the hotel as we left, a habit I’ve developed since my futile attempts to pronounce the name of a Delhi hotel to about 70 taxi drivers. So. Why Santander. Well, the Little Nurse and I love Spain but not so much the resorts. We are going to visit all the cities and all the large towns. As soon as we see cheap flights we’re off. STN-SDR was £40 return.

After breakfast it was time for lunch. No. Wait. Not straight after breakfast. That would be fattening. We had a walk down to the area around the Botin Art Centre first, and the park behind it. We had walked a few miles, had a coffee, and generally got the feel of the place. We met two young Brits bound for the Camino de Santiago. Recognisible by the scallop shells attached to their packs; they intended to walk south for 150km and pick up the main trail there. They would be camping along the way. Intrepid boys. Interesting to me though, as my own Camino was well into the planning stages.

Now it was time for lunch.

It was a bit of a trek to get down to the ‘Barrio Pesquero’. This area was developed on old industrial land back in the 1940s. The wholesale fish market (La Lonja) was established, and over 500 homes for the fishermen were built. There are a fair few seafood restaurants there now, and, taking Rick Steins advice, we found a table on the terrace of one of them. The Little Nurse is not that big on fish. Terrified of bones. She decided on a fillet of hake – no bones –  and I chose the sea bass. The waiter indicated his blackboard highlighting the seafood platter for two. A speciality. Hmm. A speciality? Or something you want rid of? It came with a bottle of wine. The clincher. Bring it on. The ubiquitous bread was brought, then the wine, then a selection of medieval torture implements and some dentists tools. Oh dear. This could not end well. The wine was nice though. 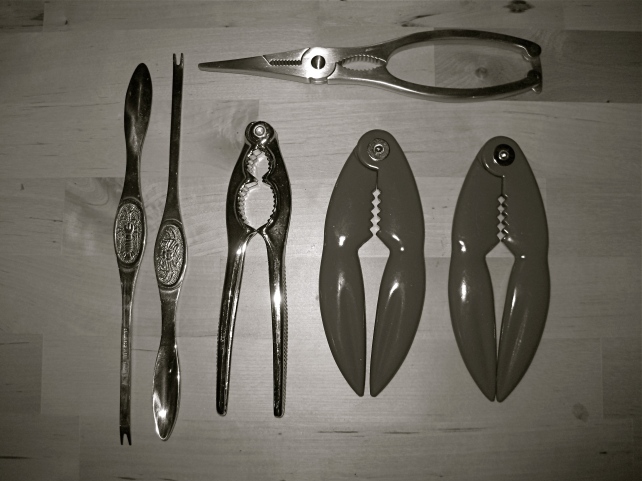 Eventually he brought out a huge metal platter bearing one of everything you can find in the sea. We recognised about 5% of it. Jaques Cousteau hasn’t even seen some of this stuff. We looked around the terrace. The locals were happily tucking into the same stuff. They were all, obviously, trained surgeons and the tools previously supplied were just an extention of their human hands. Not so for us. We had little chance from the off. We poked, we dug, we hammered at this platter of spiny aliens. We separated the fare into four piles. The smallest pile (two mussels and a tigerprawn), we knew we could eat. The bigger pile was stuff we might have a go at if we got drunk enough. And by far the biggest pile was stuff we would have no chance of getting  through the defensive armour of. The final pile was just eyes.

Our fellow diners had started to notice us. They are amused. I am by now covered in my own blood, mixed with an unidentified dark green slimy substance from the inside of a crabs foot. The Little Nurse has a look of disgust, horror, and hunger in equal parts. It’s been half an hour and, apart from the bread, I have eaten about 5 grams of food, The Little Nurse a bit less plus half a lemon. We have emptied two napkin dispensers. It seems impossible that the platter contains anything more that’s edible. The debris on the other ten or so tables combined does not remotely equal  what we have left. We gave it up when The Little Nurse almost took someones eye out with a flying creature whilst using the nutcracker thingy. The astonished waiter asked if we were done. ‘Si’. After he cleared everything he asked if we wanted el postre (dessert). Yes. Yes we did. I ordered a hake fillet and a sea bass…

‘They’re laughing with us,’ I told The Little Nurse, ‘not at us’. I said, not entirely convinced.  Out of pity the waiter gave us another bottle of wine, gratis. We had put on a good show, and, for that, at least, we were to be congratulated.

All the blog links are HERE

Camino part one is HERE

6 thoughts on “Santander 1: Shellfish from Space”