I set off with my itchy skin and made for Cardenuela Riopico. I didn’t know anything about this village other than it was 25 km away and the last place to stop before Burgos, a further 12 km on. So a good hike then. I hadn’t built any rest days into my loose plan and I’m trucking along a bit, trying to steal an extra day to rest up in Leon. Well I say rest up, but if you know me, have read my blog, or have been to Leon then you will have already substituted the words ‘rest up’ with ‘party down’.

I met a very ebullient Londoner on the route today, Martin. We didn’t walk together much but we ended up in the same albergue. What an optimistic guy. You couldn’t upset him if you set his car on fire.

He’d just go ‘Thanks man. Look at it burn. Brilliant, thanks for that.’

His wife had started the Camino with him but had nowhere near his enthusiasm and was doing a few stages by taxi. To be fair she was carrying injuries. Martin was unconcerned. ‘Yeah man, brilliant. She just fell off the cliff, awesome’

The Camino seems to attract nice people. Seems strange but it does. Lifelong friendships are made on the trail. Age and nationality don’t matter. People have married having met walking along. I have been invited to many people’s homes across the world. Just this week somebody invited me to Northern California and asked me about my town, Harrogate, When would be a good time to visit?

‘Anytime after The Majestic Hotel refurb is finished.’ I said  ‘You’ll be very comfortable there.’

So. In a small village like Cardenuela, there’s not many options for dinner. Two in fact. The pilgrim’s meal in my albergue, or the pilgrim’s meal in the other albergue. I got sat next to Martin and a fun girl, Mariana, from The Netherlands (not Holland, she instructed me to say)

Boy could Mariana drink. As luck would have it the people around us didn’t like the wine. I know, I know. Like there’s some mystical place where bad wine exists. Yeah, right. We helped ’em out.

As a starter I chose ‘mixed vegetables,’ A selection of vegetables boiled for infinity in water. To prove that they had, in fact, been boiled in water, we were served a nice big ladle of said water. Nice and tepid. I grabbed my non drinking neighbour’s wine glass and drained off the water. Now he couldn’t change his mind about the wine even if he wanted to.

I swerved the main course, “vegetarian lasagna.” Mariana gave it a miss too and we both took our job of mopping up all spare wine seriously. We guzzled away, Mariana matching me gallon for gallon. Martin had a few but fell by the wayside as the pro’s moved up a gear.

There were mixed views on the vegetarian menu. Vegetarianism is on the rise. And they are getting more aggressive. Once they took what they could get and sat in the corner with their broccoli quiche. Now they make the rules.

‘This knife. The one that you prepared the endive terrine with? Has it ever been in the same drawer as a knife used to cut up a poor, defenceless, murdered creature? If so then I can’t eat the terrine. You will have to burn the kitchen down and start again.’

Well, vegetarians. Don’t come running to me when the towns are over run with pigs. I’ve done my bit.

Martin snored all night. In a happy way. His wife told us he would snore if he had too much wine. After an hour I grabbed some sleep in the garden on a sun lounger.

I got an early start and headed for Burgos. Rolled in at 10,00, got cash, bought bite relief salve from the farmacia, checked out the cathedral and rolled out before 12.00.

Going to Burgos and other places next year by car with The Little Nurse so that was enough for now. We’ll be tourists. 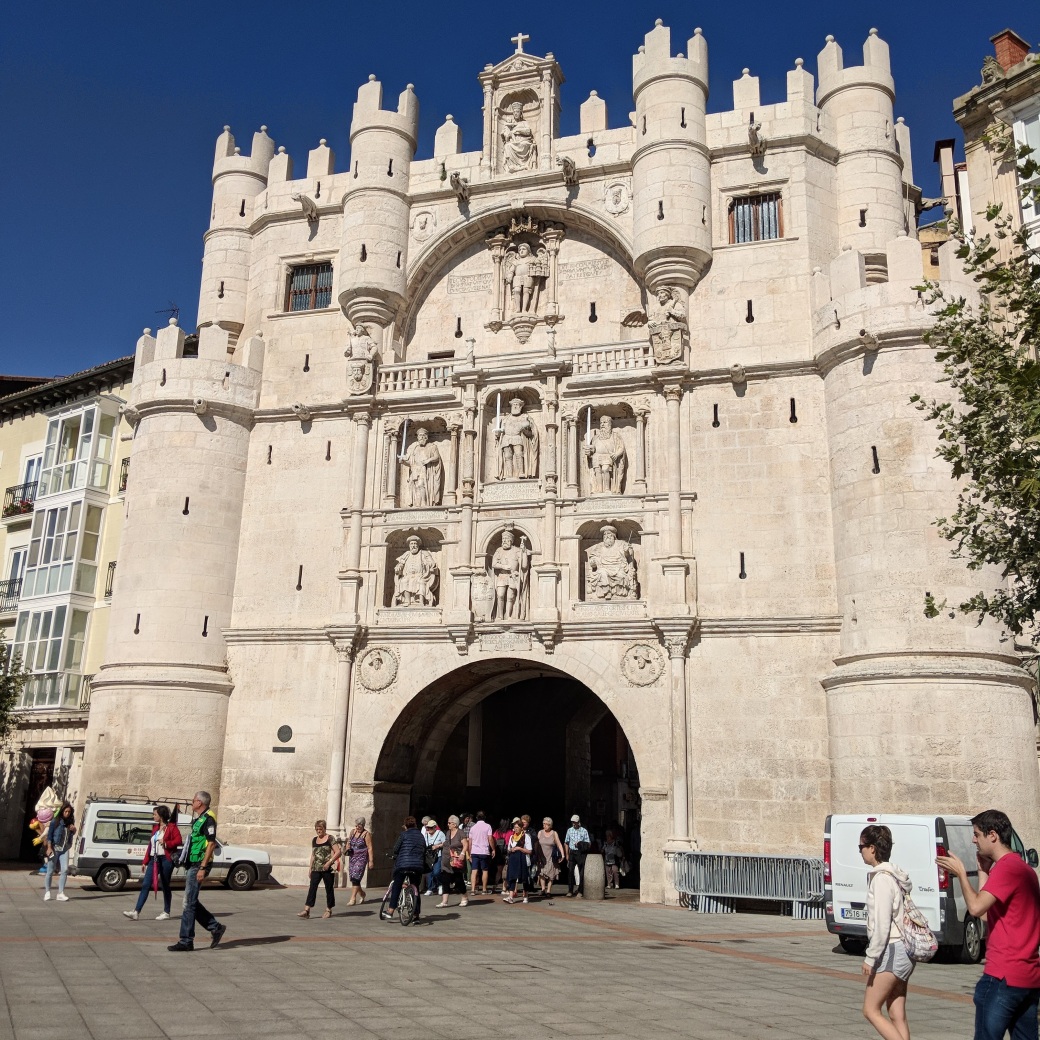 On the outskirts of town I found a quiet little park and decided to do something about my itchy legs. It must have looked odd to a passerby, me, on a park bench, trousers round my ankles, dabbing away with a lipstick like device. Before you ask. No, there are no pictures. At least not on my phone. I can’t speak for the paparazzi.

8 thoughts on “Camino Two: 8, Lentils Are The New Steaks.”