My famous trademark hat blew off in the tuk tuk. The driver pulled over but the hat was long gone. If you’re visiting soon and you see a spiffily turned out monkey you will know where he got his hat. Next stop the hat stand. I bought a replica for 6 dollars after a 20 minute haggle. Yes 20 minutes. I never give in.

Our driver, Preahk, pulled into the ticket gateway. Prices had risen dramatically just a few weeks before to $62 for a three day pass. It’s a lot cheaper for Cambodians which is fair enough. The ticket seller didn’t believe I was Cambodian. Probably because I weigh the same as an entire Cambodian family, plus I don’t speak Cambodian. I paid the foreigner price. For the size of the site and the money they must need for maintenance and restoration, I didn’t think it was outrageous. A bargain compared to Warwick Castle. 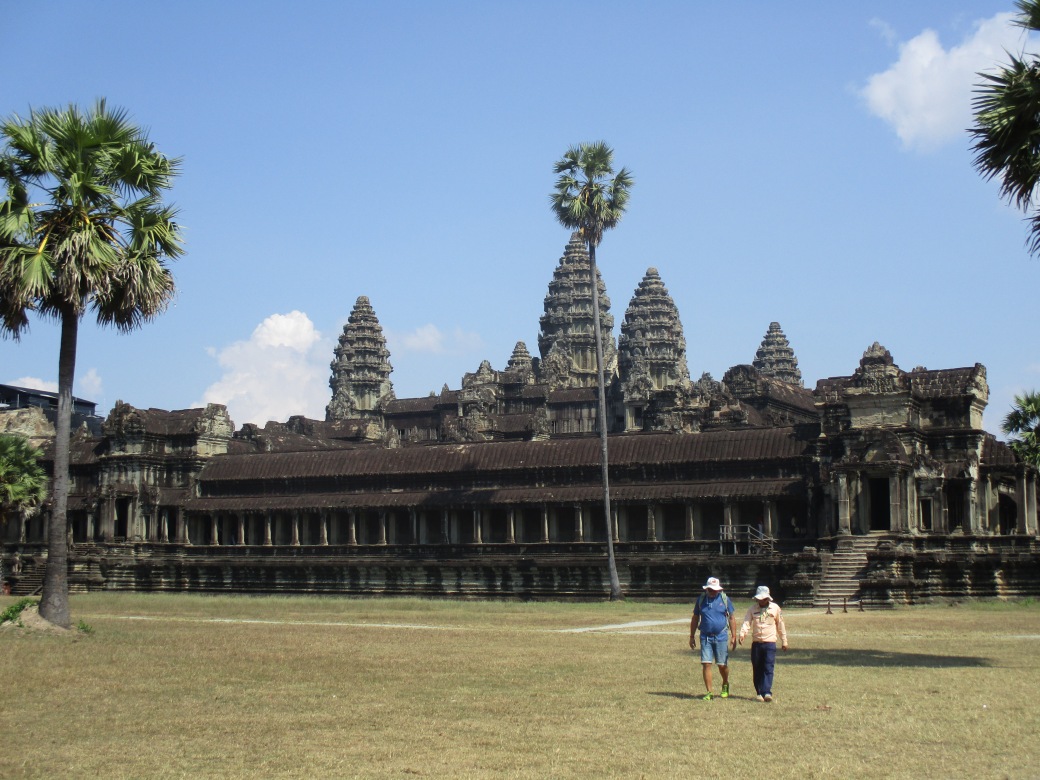 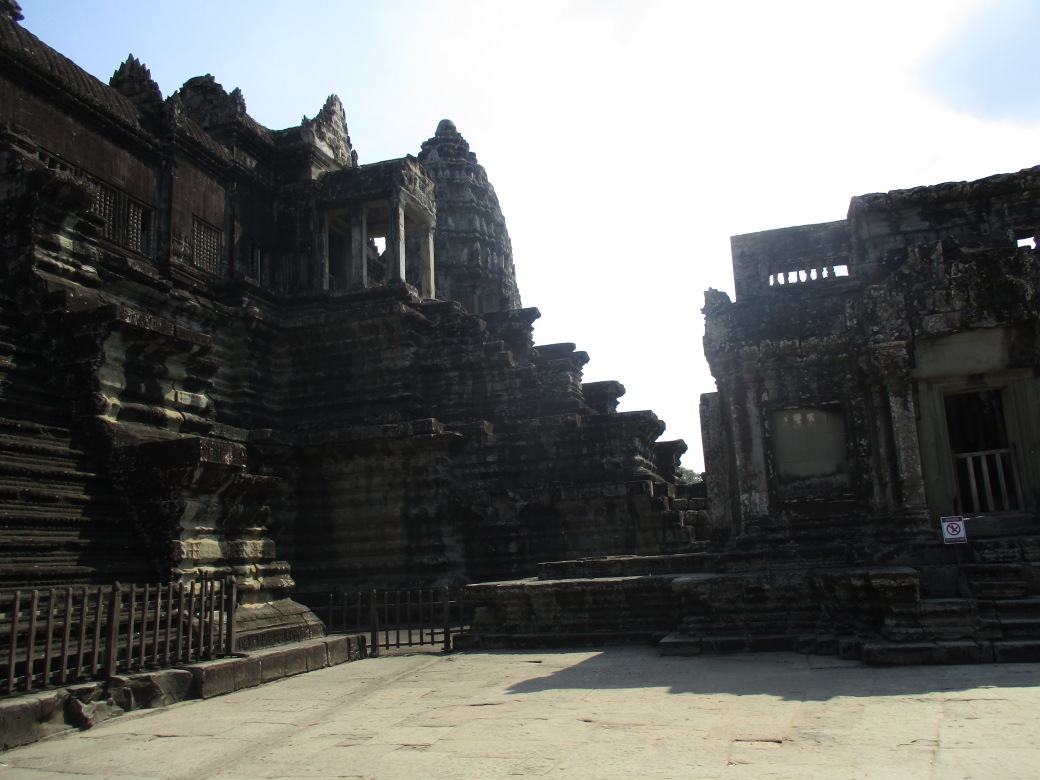 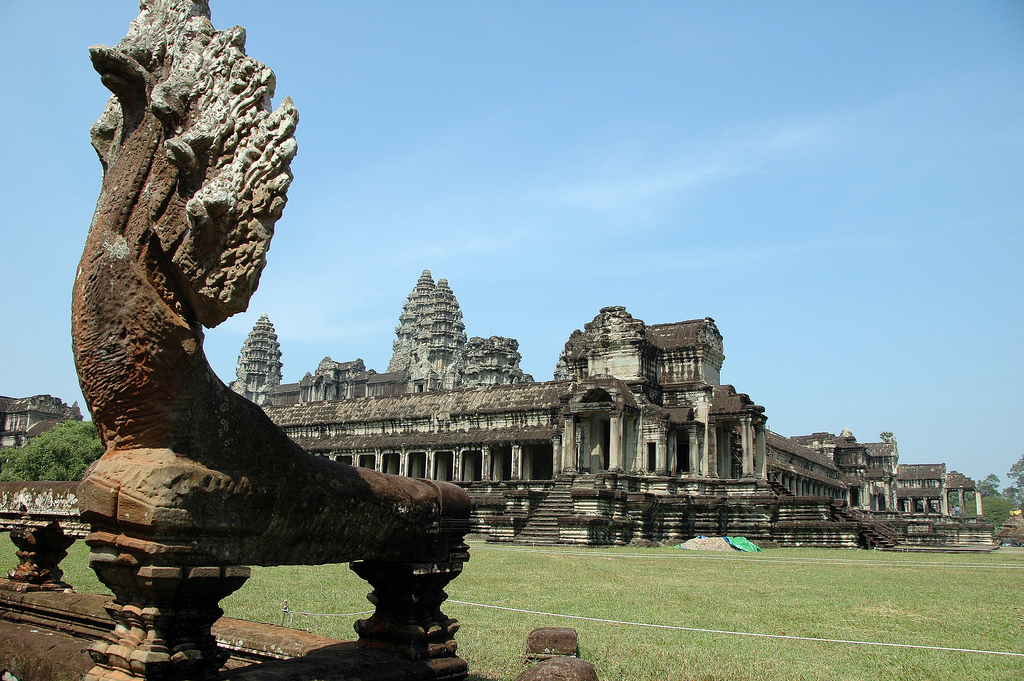 We continued to the first, and maybe, the most photographed temple. Although the whole site is referred to as Angkor Wat by most visitors, and indeed by most guidebooks, it is this temple alone that is Angkor Wat. The whole site is more correctly called Angkor Archaeological Park or, more simply Angkor Complex. So now you know. 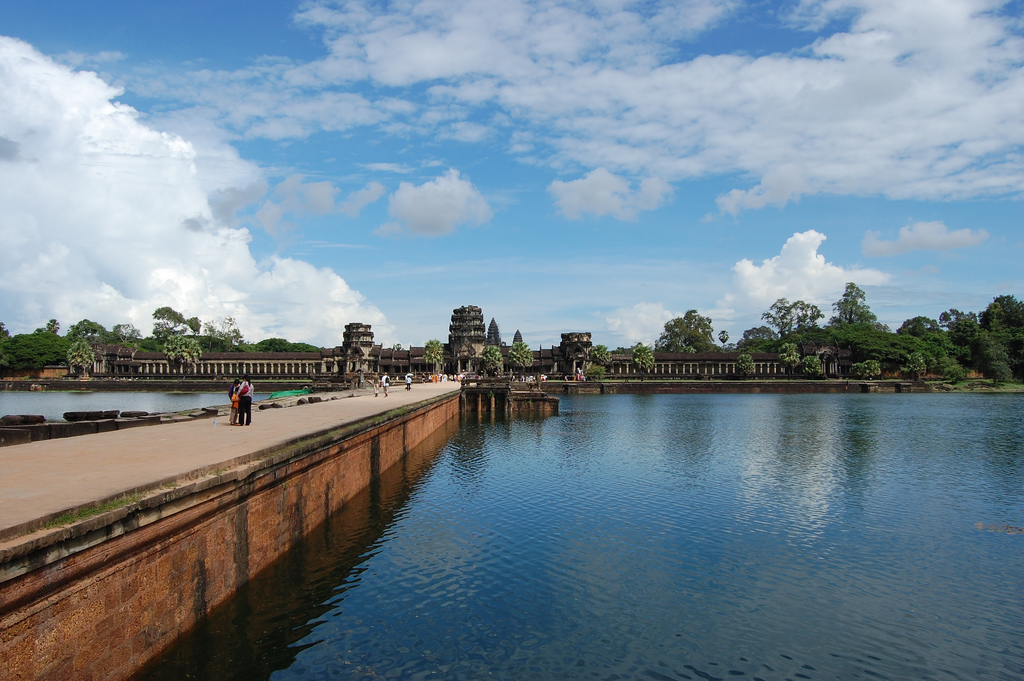 Entry is gained by walking across a causeway over the 200 metre wide moat. It’s a fabulous approach and as you draw closer the sheer size of the temple is astonishing. The west perimeter wall is a kilometre long. Highest point of the temple is 700 feet from ground level. But that’s enough figures. The only figure you really need to know is the cost of your airfare because no amount of guidebooks, or TV documentaries can compete with the real thing. You have to go. If you can’t go, because you are ill, go when you recover. If you’re too old to go, then too bad, you should have gone sooner.

Through the west gate is a statue of Vishnu the Boss God of the Khymer people. Flowers, fruit, and most curiously, locks of hair, are left around it as offerings. The Little Nurse tried to get me to leave some hair. A clever trick, but I know she is developing hair envy as mine continues to grow and is in better condition than hers.

We explored the temple at length and took a zillion photos. We spent half an hour on a little game I invented many years ago at the Taj Mahal. We play it occasionally at crowded attractions. The Little Nurse, within earshot of our targets, extols the general magnificence of said attraction whilst I listen deadpan. Then I pipe up ‘Yeah. Pretty good. But it’s not exactly Disney.’ Then we shut up and bask in the hostility. No one ever says anything directly to us, but there is plenty of private discussion. Often between strangers who then become lifelong friends, united in their sanctimony.