KS Road is the backpacker area of Bangkok. It’s super friendly and super cheap. The under 25s, Europeans, Kiwis, Aussies, and Americans all stay around here. The dress code is double scruffy, dreadlocks optional. I’m not sure if Bob Geldorf has ever been here, but if he has then you can guarantee he would have been the best dressed guy around. This is where a group of 10 in a restaurant ask for a $15 check to be itemised and split. Everything is cheap and everything is available.

They also had weird stuff.

I bought two tee shirts and a pencil sharpener. Oh how we haggled. I am getting through one tee shirt per meal. Reason? Bloody chopsticks. What kind of design for a utensil is that!? Its basically a one pronged fork. Except you can’t even spear anything with it. Because it’s blunt. And you are supposed to use two. But with one hand. The guy who come up with that design. For a utensil. To eat food with. Well… nutjob. Ok plenty of people can do it. Me, nah, not prepared to put the time in to learn. Not worth it for a coupla weeks twice a year in this region, or to just look like a dick in Waggamama. Tomorrow I’m stealing a fork from the hotel. In the meantime, buy more tee shirts. Oh yeah, forgot. The pencil sharpener is to customise my chopsticks in case I lose or forget my stolen fork.

I spent a bit of time in a tiny shop packed to the rafters with luggage. I’m gonna need a bag for my new clothes. They had every different size there. Sports bags, backpacks, and attache cases. Every imaginable size. So the attache cases made me think of all the movies I had seen involving ransom money, or some other illicit pile of cash. I have noticed, regardless of the amount of illicit cash and the type of currency, that the money fits exactly into the case. There’s never a little gap at the edge. And they never have to slot a bundle or two the other way round. Or sit on it to close it. So this must be the shop. The ransom money case shop. You probably just phone him, tell him you want your loved one back and the amount of the ransom. So, 500,000 US Dollars, 1 million Swiss Francs, 2.5 million Sterling. It doesn’t matter to ‘Ransom Cases R Us’ The guy at the shop just goes “Yeah yeah, ok, no problem, you need a 37B. It’s in stock. With you Thursday. Yes, yes, guaranteed no gaps”.

Everyone knows that fat people are harder to kidnap. As I have lost a little weight recently I may have become more of a target and I wondered how much my ransom would be, or how much my loved ones would pay to get me back. Hmm… moving on..

I left the shop because I spotted a pharmacy next door. Yes! They had eye patches. White or black. My skin is white so I opted for black. It has an edging of charcoal grey. Ultra modern and avoiding the pirate look. 100 baht (2.50GBP) well spent. Just waiting for the eye injury now.
“I have enough guitars” – SAID NO ONE EVER, so I wiled away an hour in a great guitar shop. Prices at least half of similar quality instuments in the UK. Bringing a guitar back from a humid country to a drier climate is something I need to research and I will before I visit Ho Chi Mihn City later in the year, a town famous for guitars.

I was once again propositioned by the fake ID procurer. Sadly he couldn’t do passports. I was thinking North Korean (just in case). I said I had no money, but if he could make me a credit card then at least I could pay him. He inexplicably declined. His work can’t be all that good then, can it? We parted on good terms though. He was a nice guy… for a criminal.

I wandered into Chinatown.

Not as interesting as I thought. Another market. Hey ho. Then, at the edge of the market I saw what appeared to be bouncers guarding an alley. Looking past them into the alley I could hear quite loud Chinese voices. So. Well well. An illicit dice game. Bouncers. Lookouts. Thousands of Bahts in the kitty. No one understanding English. Mysterious rules. What’s the worst that can happen?

Even I’m not that dumb. I gave it a swerve.

Walked miles. Finally found a station and went back to the hotel.

Out, later on I went to, what’s known locally, as the train market. It was pretty cool. Arranged around the outside were several big bars with live music. There were loads of quality food stalls and the usual other stuff. A lot of the food I didn’t recognise so I went by colour. I ordered a large of the red and a smaller portion of the black and green. Nice anyway. 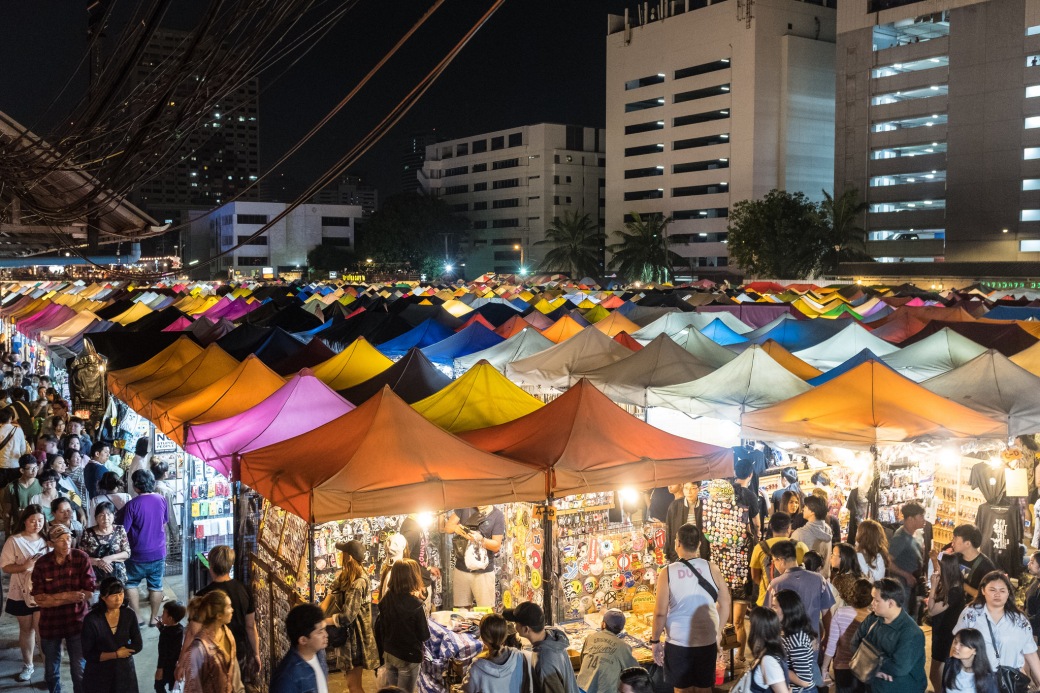 I watched the band. The guitarist was good. Technically. Being a novice guitarist myself I have watched tons of you tube videos showcasing these young S E Asian kids. They are great replicators, and they can sound like anyone. Eric Clapton, Gary Moore, Knopfler. Anyone you can name. But. They have no, y’know, mojo. No soul, baby. They don’t feel it. They know all the tricks but something ain’t right. By the way, I wish I was half as good as the kid I was watching.

Anyway, a good coupla hours well spent. Best market yet and not so many tourists. So then, back to my ‘ hood on the train

I had spotted The Black Swan Pub earlier right opposite my hotel. As I had had some beers at the market I decided to stay close by. I’ve been in the city now for over 30 hours without mishap (a new record by the way. Not boasting. Only saying.) So I didn’t wanna tempt Providence. Whoever she is.

In I went. Got a G&T and found myself talking to two Danish guys. Young, fit Vikings. I got Sven’s name. But after several attempts at his friends name I just referred to him as ‘The Other Dane’. They had already eaten, been for their handsome lesson and now they were drinking. Oh yes. They were drinking alright. Beer. Gallons of it. I never saw ‘The Other Dane’ pick up his glass. But it always seemed to be empty.

I must have had a dozen gins. And I had ducked out of a couple of rounds. And that was before I fell off the stool. No injuries, although I would have accepted a black eye to get some use from my new eye patch. Plus I could have told everyone I was in a fight;
“You should see the other guy”
Sven picked me up and ‘The Other Dane’ bought me a large one. I had to go. These people weren’t human. I necked the large gin.

I thanked Sven and ‘The Other Dane’ for my daughter’s blonde hair and for my own blue eyes.
“Thank you for invading us”. I said.
Gratitude is always welcomed. Even if it is 12 centuries late.
Bed.

One thought on “Bangkok: The Kao San Road, Sven and the Other Dane.”