The population of Bangkok is 9 million. By a happy coincidence there are 9 million shops. One each. I went in search of mine. I needed tee-shirts and because I had seen two people at Zurich airport with eye injuries, I had decided to buy an eye patch. You never know.
Of the 9 million population, 8 million had decided, just coincidentally, to take the same route as me, at the same time, and on the same train. As there were 8 carriages the maths was simple. One million to a carriage.

I would have liked to have chosen my own disembarkation station but the crowd had other ideas. And so there I was, at the bottom of the stairs at Chong Nonai Station, two stops short of the central pier. I walked. I was soon at the riverside and boarded a boat for the Grand Palace. The boat ride was so nice I missed my stop and stayed on till the end of the line. 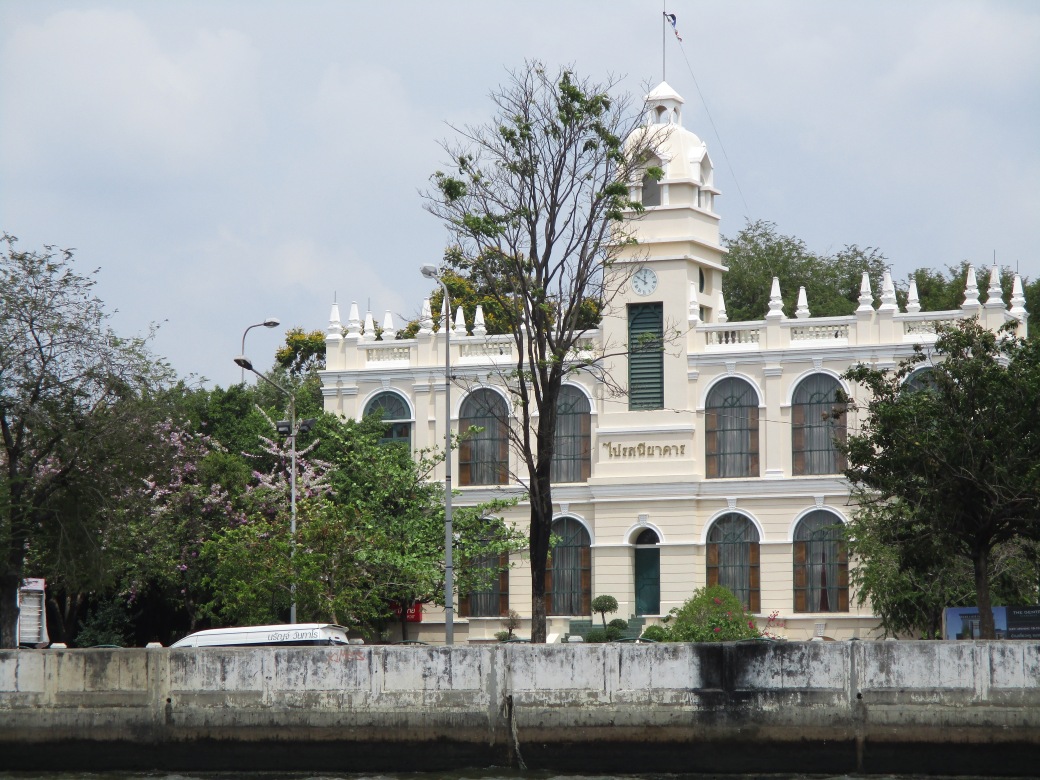 Outside a little park, wondering what to do next, and perusing my map. I was approached by a smartly dressed man offering to help me. Had I seen the giant Buddha he asked. “You should go. Straight away. It’s free today.” He marked it on the map and also marked a fashion shop on there. “Because it’s wedding season the government is giving tuk tuk drivers petrol so they can take grooms to get kitted out. So you must only pay the driver 20 baht (50p)” As if by magic a tuk tuk driver appeared and my new best friend gave him instructions.
“Only 20 Baht” he told the driver.

OK, this is not my first time at the rodeo. Government? Free petrol? Yeah, right. I’ve seen this scam many times before. But, like all scams, to be successful the scammee has to willingly give money to the scammer. So that’s not gonna happen. Now then, I had a reason for going along with all of this nonsense. I had decided a while ago to have some tailoring done in Vietnam. I had selected my tailor and in order to hopefully achieve a good result I had been boning up on the world of tailors and their jargon. I didn’t know much, but I knew a bit and I could certainly talk the talk.

Off we went. The Big Buddha was a statue of a Buddha. And it was big. So no infringement of the trade’s descriptions act there then. Other than that it was underwhelming. My driver guide wanted me to go inside a temple on the same site to see some dead guy in a box. I declined. These places look deserted but once inside those crazy monks, who look like Uncle Fester in orange, emerge and are super nice to you. Then suddenly it’s donation time. Now, I can stiff beggars, peddlers, and tinkers all day long, but those monks… They’re something else. If they disdain you then you have been well and truly disdained. It can ruin your day and give you nightmares. Jeez, I remember this monk in Sri Lanka… No. Let’s not go there. It’s a dark place.

Ok big Buddha, box ticked, off we go. Next stop the tailors.
Pounced on in half a second. A big sales pitch… so cheap…so fine…many English customer…yadda yadda yadda.
“Hmm” says I “Lemme see some of these finished garments”. I inspect a jacket at length. “Hmm.”
The sales pitch is still going on. “Hmm. The gorge line is a little high don’t you think. Is your cutter Indian. They like a high gorge line. In England we don’t care for that. And this pick stitching on the lapel is by machine, something that simply must be done by hand.
The salesman is by now non plussed. He has few weapons. He tries price. “How much you pay for a suit in England”
“Irrelevant.” I say. “I pay whatever it costs. It’s unimportant. Quality is important”
He grabs a bolt of cloth. “Look sir. 180 superfine cashmere from Italy”. His last remaining weapon.
“Hmm” says I “Too light for a 3 season suit. We think the Prince of Wales is odd with his predilection for 140 superfine. My friends and I prefer 110. And we would never go lighter than 120. Anything lighter in cashmere tends to develop a sheen. Also you should have a word with your supplier. I’m certain that cloth is not Italian, look at the weft. Probably Indian. Excuse the pun but I think he’s stitched you up”
Dear Reader, did that convince you? Well it convinced him. And I was almost convinced myself. He let me go.

Cruel? In fairness to myself even I could see that it was very average work. Probably Primark quality. The stuff I saw would look good for about a month – if it didn’t rain. Anyway it was good practice for Mr Xe in Hoi An next week. Good fun too.

The driver took me to Kao San Road, the backpacker area. I gave him his 20 baht, I told him I knew the tailors shop was looking after his boss, then I gave him another 50 baht. He was nice to me. What goes around comes around.

One thought on “The Big Buddha”